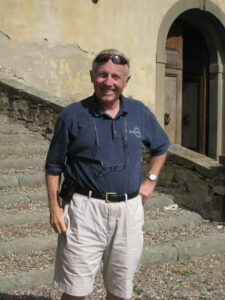 Dr. Thomas William Bauer was born in Pittsburgh PA, but moved during World War II to Connecticut. His father worked building defense factories and his mother was a schoolteacher. Moving from Connecticut to Maryland in 1947, Dr. Bauer’s family attended the Church of St. Michael and All Angels in Baltimore, where he was a choirboy and acolyte.

He attended the McDonogh School, graduating in 1954, and received his B.A. from Yale University four years later. After studying at the General Theological Seminary in New York City, he was ordained to the Episcopal priesthood in Maryland by Bishop Harry Lee Doll in 1961. He returned to Yale for masters degrees in Religious Sociology and Urban Studies awarded in 1965. He obtained his doctoral degree in Developmental Psychology and Moral Education from Harvard in 1986.

Rev. Tom served parishes in Maryland, Connecticut, and New York City, during which time he did much pastoral counseling, especially with couples prior to marriage or experiencing marital difficulties. Dr. Bauer then entered chaplaincy work at the Virginia Episcopal School in Lynchburg, and St. Albans School in Washington, DC, as counselor and teacher. He was headmaster of Grace & St. Peter’s School in Baltimore, and subsequently taught ethics and psychology courses at the College of William & Mary, while serving as rector of Westover Church in Charles City and St. Paul’s Church in Petersburg.

Following Interim Ministry pastorates in Massachusetts and at St. Andrew’s, Pasadena, MD, Dr. Tom and his wife Ann spent two years at St. David’s Chapel of Ease in Bermuda. His wife of 47 years passed away in 2008. The Bauers had two children, a son who manages multiplex theaters in Florida, and a daughter, who is a well-known graphic designer in DC.

In 2006, Dr. Bauer received a Certificate of Advanced Study in Counseling Psychology from Loyola University in Baltimore. He did an internship at Johns Hopkins Bayview Hospital and worked one year for the University of Maryland School Mental Health Program. For the following six years Dr. Tom counseled students in Baltimore Public High Schools and Middle Schools.

Prior to accepting his present position with Safe Harbor Christian Counseling, LLC, he worked a year as a Family Life Counselor for Magellan Corporation, serving military bases in Maryland and DC and counseling students at Montgomery Community College. Dr. Bauer believes that his breadth of experience over many years will enable him to serve a wide cross section of Safe Harbor clients.

Dr. Bauer is licensed in the state of Maryland #LC3151.